It is well known that honey heals. But did you hear about the term apitherapy? It is a procedure for treating health problems with bee products such as honey, pollen, propolis, royal jelly, bee poison and beeswax. Although used in the treatment of various diseases and their symptoms, its use is still part of alternative medicine.

Honey has been used over 9000 years ago

The use of apitherapy goes far into ancient history. Scientific research has shown that humans had been using bee honey and wax already in the Stone Age, over 9.000 years ago. Honey has been used in diet and religious rituals, but also in medicine and cosmetics. Even then, it was discovered what benefits honey has using it every day. The link between humans and bees has deepened through history. Ancient Egyptians, Greeks and Romans were into bee-keeping. In ancient Rome, demand for honey was so large that it had to be brought from remote parts of the Empire like Spain and Corsica. Bee wax was used for medical purposes; for the treatment of dysentery and healing of open wounds.

Apitherapy is still not widely accepted in modern medicine

Human health was largely depending on the use of bee products until mid of the 20th century when they were replaced by antibiotics. Nowadays there are scientific evidences that honey and other bee products have antibacterial properties, nutritional and therapeutic value and act as antioxidants.

However, the use of bee products is not widely accepted in modern medicine. The reasons lie in the fact that each of them has a complex composition and structure and that insufficient clinical trials have been conducted to confirm their efficiency. Doctors generally recommend using it for their benefits, but their exact role in the treatment of certain medical issues requires further research. Since there are various apitherapy methods that may cause side effects, it is necessary to consult a doctor before a long-term and intensive use. The doctor can confirm that the medicines we currently use will not affect apitherapy, because its use would not have the opposite effect as the desired one.

Where exactly can different kinds of bee products help?

Apitherapy can be introduced into our lives by various means, for example, honey or propolis can be used as a dietary supplement, and products of bee wax for everyday body care. From the wide range of bee products, we list those who bring the most use to our health: Depending on the health problem you have, choose the product that best suits you from our diverse range of honey, honey blends, fresh royal jelly, propolis and pollen as well as natural cosmetics. 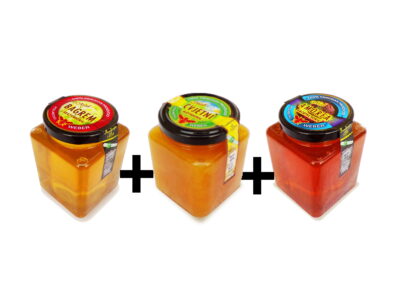 customers in Croatia and abroad have tried our products.

customers are content or very satisfied with our products.

are our loyal customers regularly using our products.

"I am very satisfied with Honey Veber product, and I've tried them all. Revital komplex with Royal Jelly is fantastic. Keep up the good work."

"We were very happy with Immunohoney. We definitely recommend it."

Fast and affordable delivery in all of Europe

Many awards and a quality-guarantee of the product
Ask us

Ask us a question